Wave energy is estimated to be able to contribute with power equivalent to 15% of the Danish electricity consumption and create opportunities for export of components, products and jobs. Several different wave power systems at different scales are being developed and tested.

The Danish wave energy developers have created the “Partnership for Wave Power” and prepared a strategy for development of wave energy in 2012 followed by roadmaps in 2015, which aim at Danish and international commercial success for the wave power sector by 2030. The funding required to support the development in Denmark is estimated in the order of DDK 5-20 million /year. The partnership meets twice a year and share their experience accumulated from R&D and tests in the sea.

DanWEC test site is being developed with Greenlab funding. Two wave rider buoys have been launched and a seabed survey has been carried out over an area in the sea south-west of the harbour. This area has been accepted by authorities for test purposes, and at the moment the wave energy system Wave Piston has a permit to test in this area and deployed their anchoring system during the summer of 2015.

The Danish wave energy sector is involved in co-operate projects funded by European Union (EU) as well as international collaborations.

NATIONAL STRATEGY
In 2015, the Partnership for Wave Power published a set of roadmaps for development of wave power, which aim at Danish and international commercial success on the wave power sector by 2030. The roadmap work has been funded by the Danish Energy Agency.

PUBLIC FUNDING PROGRAMMES
National energy development programmes such as EUPD, Energinet.dk and the Danish Strategic Research Council are able to fund development of wave energy, as well as other sources.

MARINE SPATIAL PLANNING POLICY
A new law for the use of marine space has circulated for comments at the end of 2015. The purpose of the law is to establish fair rules for the use of marine space in addition to the traditional sectors such as fisheries and transport. It concerns economic, social and environmental conditions, as well as safety aspects in order to support sustainable development and growth in the maritime sector, using an ecosystem-based approach, and the promotion of coexistence of different relevant activities and users:

PERMITTING AND LICENSING PROCESS FOR OCEAN ENERGY PROJECTS
Wave energy converters to be tested at DanWEC or at other locations in Danish waters will typically receive a temporary permit for deployment over the testing period for one or two years. Such permit can be obtained by filling an application to the Danish Energy Agency that will process the application.

TEST SITES
The experience from prototype testing at DanWEC is very important in order to achieve the long term goals of reliable wave energy conversion. DanWEC includes two sites – a benign site in Nissum Bredning which has a maximum wave significant wave height Hsmax of about 1 meter – and an exposed site at Hanstholm with Hsmax up to 6 meter. In 2015, the exposed area was defined as shown on the figure below – it covers from 10 – 28 meter water depth in a distance of about 2 – 3 km from Hanstholm harbour. 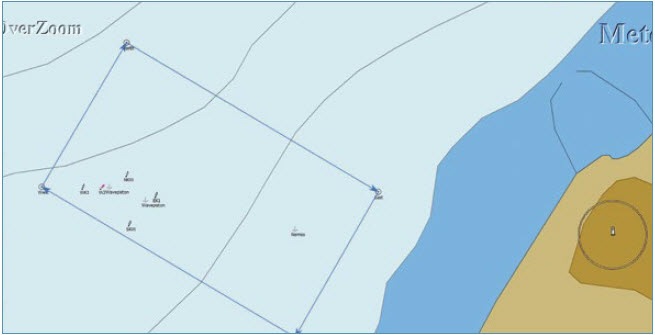